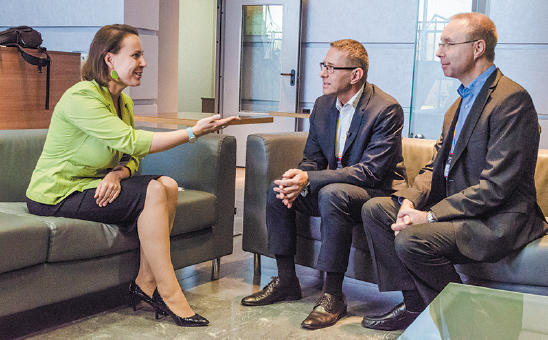 The main focus of the seminar dedicated to optical surfaces held on October 11-12 in TechnoSpark was on a machine. A very special machine indeed! Meet – Bühler SYRUSpro710, a unit for electron beam evaporation. There aren’t more than a dozen of those all around Russia. And one of them is in TechnoSpark.

It’s been for over two years now since 2016 that lens, mirrors and light filters have been specifically treated on demand here. Engineers of the Optispark Company have been carrying out sophisticated experiments and elaborating on their own know-how. In addition, this Bühler’s unit also functions as a showroom for those who want to see with their own eyes what the German technology is capable of in the Russian hands, submit an order or, perhaps, even buy the unit. Now they have all come together: 70 experts that are normally scattered all over the place from Minsk to Novosibirsk, the cream of the optical surface industry. They were joined by the workers of Bühler’s representative office in Moscow and special guests from Germany: an expert in optical systems Jürgen Krischer and the head of the R&D Department Detlef Arhilger.

While Krischer and Arhilger are talking about the history and key innovations, the Director General of Optispark Vladimir Ponomarev is sharing the latest updates on the works in Troitsk, and the director of the Moscow State University’s scientific computing center Aleksandr Tikhonravov is describing the functionalities of the OptiLayer computing program that he developed. What once used to be an art has now become an automated process for specialists: calculating the range of evaporation to isolate or pass a given bracket and then set up the unit and monitor the characteristics in real time.

Vitaliy Dogel, a technical engineer, shows a diagram produced by the computer. Then he loads the finished sample into the spectrophotometer, and the resulting curve looks just the same. One such piece of “glass” may cost anything from 50,000 to 300,000 RUB. The price depends on the quantity: there may be a request for a hundred of filters, or for a single one. In this case more items will be produced to be kept in store, included in the catalogue and sold later.

What are the practical applications? They include filters for lidar systems, laser equipment, optical items for survey instruments and the like. By the way, the conference also attracted some representatives from the Krasnogorsk Plant, the one that produces Zenitar and Helion lenses, and where the SYRUSpro units are used. It’s possible to have the photolens glass coated in Technospark too, but the requests are usually different. Say, that for “hot glass”: so it permits the visible light through and reflects the infrared rays. Or fluorescent filters for PCR-based diagnostic tests (DNA sequencing). Or narrowband filters with the coating of less than 3 nm for astronomy and microscopy. The German colleagues couldn’t believe it would work out, as it is all very near the edge of the physical method capacity, but the experts from Troitsk managed.

By the evening, SYRUSpro 710 set a record: it put 98 layers of coating a half of which was less than 5 nm thick. The base was provided by a guest of the seminar. The process cannot be observed, though, because of the clean room requirements (ISO-8). It normally lasts for 11 hours, so its results were discussed the next day.

Photo: taken by the author