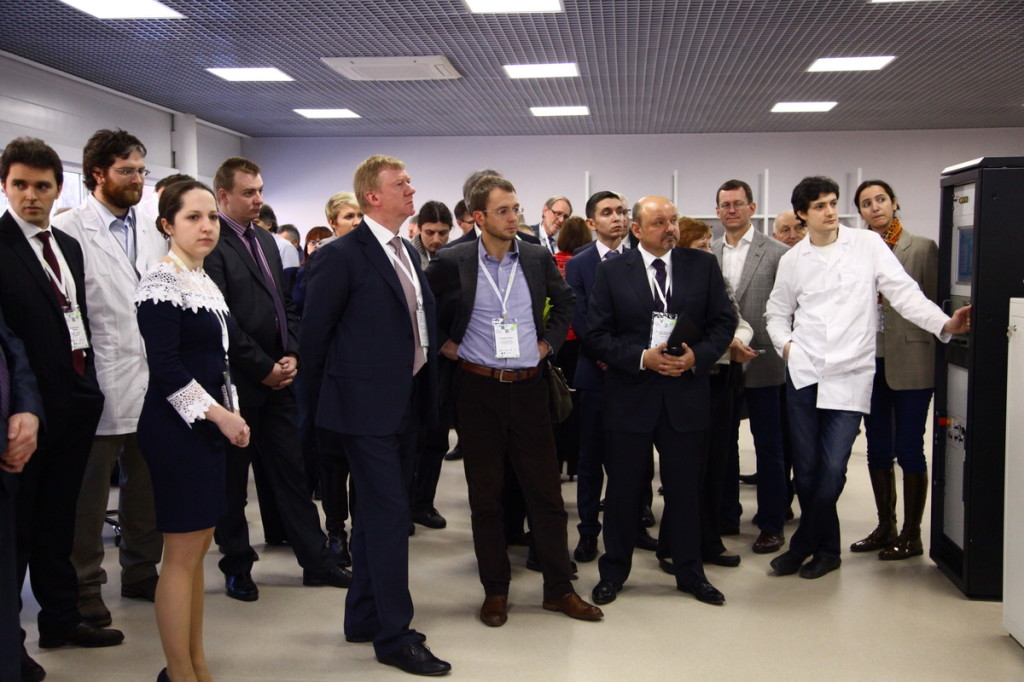 RUSNANO CEO Anatoly Chubais, the general director of the Fund for Infrastructure and Educational Programs, Andrey Svinarenko, a minister of the Government of Moscow and the director of the Department of Science, Industrial Policy, and Entrepreneurship of the City of Moscow, Alexei Komissarov, and senior managers from Dow Chemical Company, IMEC, and the Center for Technology Transfer at KU Leuven (Flanders, Belgium), were among those who took part in the festivities for the Troitsk center.
The project has a total budget of 1.6 billion rubles, which includes investment of 900 million from RUSNANO. The center has attracted partners from domestic and foreign commercial and R&D organizations, among them micro- and nanoelectronic center IMEC, a technological cluster supported by the city of Leuven in Belgium, and the Physics Instrumentation Center of the Institute of General Physics (Moscow), Russian Academy of Sciences.
Nanotech center TECHNOSPARK had its beginnings in the scientific, research, and educational institutions of Troitsk. It is the platform from which new technological startups will grow, a multifunctional complex for the development and manufacture of goods in many innovative sectors of the economy. The center is a production complex of three buildings totaling more than 8,500 square meters; two of them have already begun operations. Troitsk, with its high concentration of research centers, was a logical choice for the new nanotechnology center.
Drawing from them, TECHNOSPARK will quickly ramp up small batch production of nanotech products.
As of November 2013 the nanocenter had a portfolio of more than 20 operating startups. In the coming year, that number is expected rise to 40. The center has several specialties: applied laser technology for medicine and industry, new materials including carbon and composite materials, optical coatings, technologies using artificial diamonds, new electronics including solutions for consumer electronics, instrumentation technology, industrial design, prototyping, and technical engineering.
TECHNOSPARK is in particularly close collaboration with leading international companies and research centers. From the very beginning, this has allowed it to integrate its startups into global technological chains. For example, sources of extreme ultraviolet radiation, the development of which TECHNOSPARK resident EUF Labs is undertaking, are now embedded in lithography equipment from Netherlands company ASML, which counts the world’s largest chip producers— Intel, TSMC and GLOBALFOUNDRIES—among its clients. Such equipment makes it possible to overcome technical obstacles to producing chips with norms of less than 20 nanometers.
Still another project from the nanocenter—company Polarus, a partner of the University of Arizona—is creating picosecond lasers used to process materials and mark goods, like casings for smart phone, tablets, and microcomputers. And resident company SVD.Spark, a new materials specialist developing diamond sensors, will have its products included in radiotherapy equipment from American manufacturer Varian Medical Systems, Inc.
TECHNOSPARK has also founded an industrial design center with engineering, modeling, and prototyping specialists. One startup in its portfolio, Protostudiya, is a robotics designer that has already had success in industrial design of short-range unmanned aerial vehicles.

The Fund for Infrastructure and Educational Programs was established in 2010 in accordance with federal law № 211-FZ On Reorganization of the Russian Corporation of Nanotechnologies. Its purpose is to develop innovative infrastructure for nanotechnology, including realizing educational programs and infrastructure projects earlier begun by RUSNANO.
The chairman of the Supervisory Council, the fund’s highest governing body, is Dmitry Livanov, minister of education and science of the Russian Federation. As stipulated in the charter of the fund, the council determines the priority areas of the fund’s endeavors, sets its strategies, and establishes its budget. Anatoly Chubais, RUSNANO CEO, is chairman of the Management Committee. The fund’s CEO is Andrey Svinarenko.