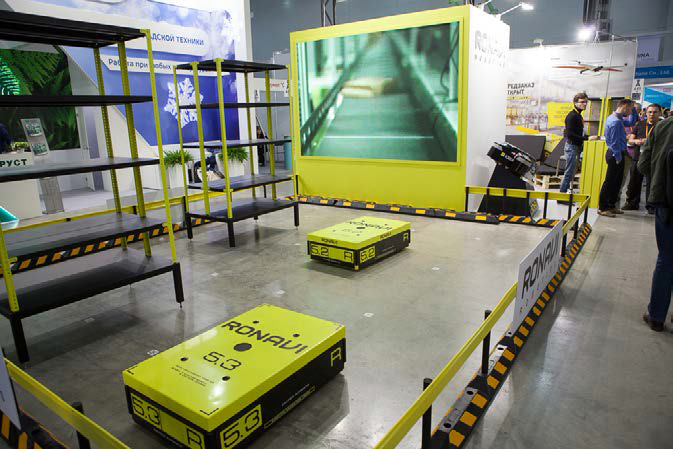 Ronavi Robotics, a company of the TechnoSpark nanotechnology center, revealed its development at the 9th International Exposition of Warehouse Equipment and Systems, Lifting and Conveying Machines and Warehouse Automation Facilities.

On September 19 to 21, Crocus Expo, Moscow, hosted the 9th CEMAT RUSSIA Exposition of warehouse equipment, machines and in-process logistics. It attracted over two hundred companies from thirty countries. The exposition was visited by more than 5500 guests.

This year was the first time that a special division of robotics was arranged where participants showcased their robotic solutions for warehouse automation. Introduction of Automated Guided Carts (AGC) — robotic carts that convey warehouse stands or pallets — makes warehouse operations 3–4 times faster and optimizes the density of products by 30–50%. Russian warehouse robots Ronavi that were demonstrated at the exposition for the first time belong to this very type of devices (their producer is the Ronavi Robotics Company, TechnoSpark venture-building company). The producer’s booth was a place where visitors could see a working model of such a robot with a lifting capacity of 1500 kilos: it is now launched into mass production. The company’s prospective concepts included a robot with a weight-carrying capacity of 300 kilos that is scheduled for production in 2019. The model was designed for batching centers and conveyance of goods loaded onto storage racks.

CeMAT is the largest and most visited trade exhibition in our country that attracts the largest number of both domestic and foreign participants. This time, apart from Russian exhibitors that displayed their products and services, there were representatives of companies from Austria, Belgium, Germany, Italy, China and some other countries. CeMAT Russia attracted such enterprises as TVH Group, STILL, Linde, BITO, MIKRON Demonstration Plant, KOMATSU, Honeywell, Kaup, Manitou, PSI Logistics, SAP, Zebra Technologies, Vanderlande, KARCHER, COMITAS, JAC, DoorHan, Savoye, SSI Schäfer and many others.