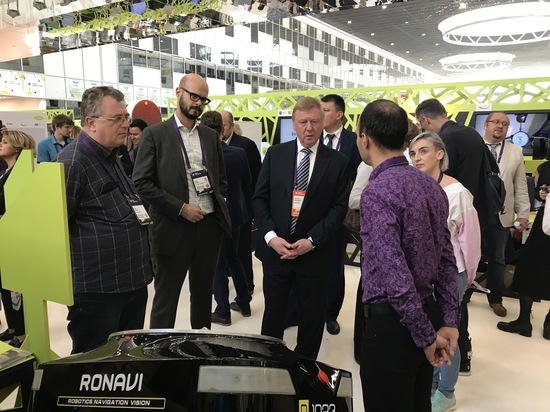 The whole event was centered around the iMarket exposition which comprised over 150 projects in 11 industrial sectors. Smart clothing, vanishing foam for football referees and heat-generating paint: these and many other innovations that are interesting and, most importantly, essential for Russian consumers were presented by directors and engineers of technological companies of nano-centers of the Fund for Infrastructural and Educational Programs (FIEP) of the RUSNANO Group.

The iMarket exposition boasted products made by daughter companies of some nano-centers operating under the RUSNANO FIEP that invests funds in the startup infrastructure throughout the country, for example, the TechnoSpark venture-building company in Troitsk, SIGMA in Novosibirsk, or ULNANOTECH in Ulyanovsk. Visitors to the forum in Skolkovo could familiarize themselves with products and service solutions offered by such startups as CarbonLab (paints for heating), Optiplane (hybrid drones), TEN+1 (foam for football pitches), BioSpark (a contract biotechnological laboratory) and many others.

One of the most exciting startups presented was the ReadSense genome center. It specializes in deciphering DNA and detecting genetic diseases. In fact, the company develops new tests (unique in Russia) the main goal of which is to scan people for potential diseases or susceptibility to them in order to detect those that can be inherited. The tests use any kinds of samples that contain human DNA: blood or saliva. A single blood test with its consequent analysis can reveal details about genetic illnesses. In comparison to other genetic tests, the one designed by ReadSense is times cheaper. For instance, it normally costs 40,000-45,000 RUB to read human DNA using current technologies. The maximum price for their domestically produced counterpart is 15,000 RUB. All it takes is just a simple blood test that is handed over to the genome center which then emails the detailed report with interpretation of risks and recommendations.

Innovative breakthrough: mass production of startups in Russia. Projects of equal caliber were presented by specialists of the ULNANOTECH nano-center. CarbonLab developed carbon paint with electric heating. A conventional system, for example, the one used in underfloor heating, provides heating only along the serpentine-shaped wire and proves to be rather costly. This domestic product enjoys the distinction of ensuring energy-efficient and even heating over the whole surface. The temperature is adjusted using a regular thermostat. The paint has a wide area of application: underfloor heating and heat insulation of walls, mirror heating, and heating of rooftops and pipes.

Wearable electronics is one of the most interesting trends developed by the Plusminus company. Generally speaking, smart clothing stems from flexible electronics. A representative of SIGMA (Novosibirsk) showcased a prototype of a smart T-shirt with embedded electrodes and sensors that keep track of the heart’s health via ECG and allow for timely detection of serious anomalies indicating that the training has to be stopped.

Startup TEN+1, which is a part of the TechnoSpark venture-building company, displayed their Ref Spray, vanishing foam for football referees. There are some companies in the world that make similar products but this particular one was designed with the regional climatic conditions of our country in mind. Another obvious advantage is that since it is made in Russia, its price is much lower than that of the foreign counterparts.

That’s how contemporary technologies are breaking the stereotypes about the world.