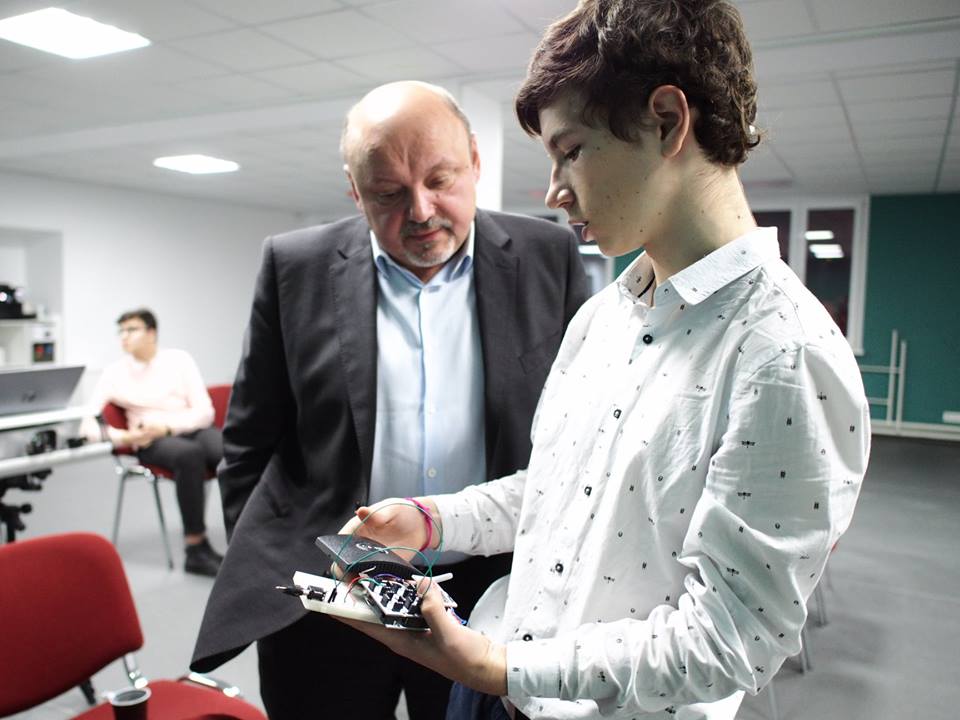 It has been a year since lessons started in the Technospark Project School at 1 Sirenevy Blvd. High school students used 3D-printers, did some programming, assembled circuits, soldered boards… Now many of those who were at the introductory lecture given by Vladimir Berlizev, head of the Project School, this time gathered to introduce their projects. “This format is called ‘demo day’: which is an encounter with investors for possible development of projects,” spells out Berlizev. Vladimir Dudochkin, mayor of the city, came to listen to what the pupils have to say.

Now the courses of the Project School have been completed by fifteen 9th graders, eight more students a couple of years younger are along their way; in total, the Fab Lab has been attended by about 500 children, and many of them have been supported by Technospark in the implementation of their ideas and project works. There is an ongoing collaboration with schools, particularly, in terms of preparation for Korolev’s Readings in Pushkov Gymnasium. There have also been cases when a school 3D-printer broke down and children took it to the Fab Lab and repaired it. By themselves! There is another one pending…

Some of the speakers are familiar after the first class. On of them is Sasha Sulimov. Once, while looking at lockers at the entrance to a store, he thought: how can the lockers be made safe and modern? He came up with an idea to use either Troika-type RFID-card keys or school cards. Alexander assembled a tag screening device. “Can they be forged?” asked Vladimir Dudochkin. “It is similar to a bank card and impossible to crack.” It immediately prompted an idea to use the same system at school, as kids are always losing their indoor shoes…

The task being tackled by Alisa Sakva doesn’t seem to belong in high tech: it would be great if the tea didn’t cool down on the table! Alisa devised a thermomug that is wirelessly charged and then heats up the drink by means of induction. There is an issue – the power is too low to heat up the tea quickly enough.

“Is the equipment in the Fab Lab handy?” asks Vladimir Dudochkin. And suddenly there pops up the most curious thing. Tools and devices are good. Information that is impossible to find on the Internet and exchange between generation are even better. But first and foremost it is the environment where ideas are born. When it is in place, kids don’t need any tasks to be given to them: they set their own goals, as well as their own deadlines. All the Fab Lab has to do is to distribute resources: if one project is overdue, the financing will go to another one. Another skill to train is persistence, an ability to go on even when it seems like nothing but a blind wall ahead. “The main difficulty in children’s projects is that they are abandoned after the first problem,” says Vladimir Berlizev. “We give a hand in overcoming the issues. It’s important to make sure children don’t feel like children. For this reason, they have to be treated like grownups, colleagues, then we will see responsibility evolving in them.”

“Knowledge we get here really helps us. At home everything would have stopped,” comments Sasha Sulimov. “The best thing here is the never-ending communication,” Alisa Sakva adds. “We help each other if something goes wrong. If I don’t happen to know something, someone else does. If I need some soldering, and I can’t – a friend will help me out. We are a big team that has everything we might need.”

The Technospark Fab Lab is open from 2 pm to 7 pm in the business incubator building at 1 Sirenevy Blvd. The doors are not only open to participants of the Project School, but to all pupils with a creative project that requires some modern equipment and professional consultation. More details are available at fablab.pro and in the community vk.com/nano4kids.